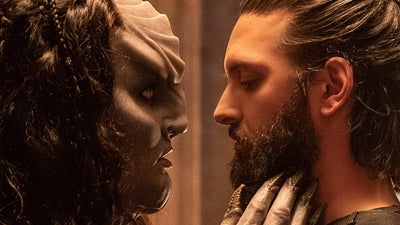 ‘Point of Light’ was an episode of two halves in which one half was compelling and very watchable and the other was, basically, a waste of time. I’ll get to the good bits, but first a brief rundown of the useless part.

We open with Burnham trying, once more, as she has tried in both episodes 1 and 2, to interest us in these red lights and in the connection between the red lights and Spock, and in the connection between Spock and Burnham, and how the connection between Spock and Burnham might be related to the red lights… oh God, please stop. We do not care about twinkly little red plot devices in the sky whose only purpose is to be an excuse for two things. These things are, one: to give Pike the authority to reactivate the Spore Drive despite the harm this does to Stametz, and two: to give Discovery an excuse to go places and do things when it gets there.

Really… so far, that’s all the red lights have been good for. Plot devices.

And Spock? Well, he’s just another plot device, and a really bad one, too.

But enough of that! Ash Tyler has a beard, and he’s L’Rell’s new Torch Bearer. He’s also up to his nostrils in a very Shakespearian story set within the halls of power at the top of Klingon society, where there is forbidden love, assassination, intrigue and heart-wrenching sacrifice. It’s all good stuff. It comprises most of the watchable and interesting scenes in this episode.

And we get to see a proper D7 cruiser! At last! An actual proper Klingon ship from Star Trek, not the eccentric collection of weird designs that we got in Season 1. Some of those looked like electric guitars that had been melted a bit. Compare that to the D7, which has bags of personality, most of which is staring down a barrel pointed right between your eyes. It’s a very welcome addition to the show.

As if all that wasn’t enough, we also got Emperor… sorry, Captain Georgiou who has become a Section 31 badass. This is almost a sour note in the Klingon half of the episode because Georgiou is almost too badass, too well-equipped and too powerful, easily defeating a gang of tooled-up, alert Klingons with some very fancy technology. But as that’s pretty much the only sour note in the Klingon half, it’s forgivable compared to the dross we get elsewhere.

And it means we get more Georgiou!

Not only does Tyler have a beard, he also has a little albino kid! Apparently Voq got L’Rell in the family way before he was modified into a human. But this doesn’t help us to resolve the essential problem with the Voq/Tyler character, which is trying to figure out if the individual in front of us was born Voq, or born Ash Tyler.

In other words, does the physical body in front of us have Klingon sperm or human sperm?

One suspects the writers of both seasons haven’t been able to make up their minds about what he really is. It looks like they’re just keeping it vague and rolling with it. And maybe they’re right: maybe it really doesn’t matter. Maybe it’s actually turned into a brilliant metaphor for the confusion Tyler feels about himself, because it seems as though he doesn’t know what his sperm looks like, either!

Overall, this half of the episode earns a wow. It’s disappointing that the albino child was so quickly written out of the show, being sent to a monastery from which he will never return. But other than that, we got Shakespearian plotting, a D7 cruiser and Georgiou. If ‘Point of Light’ was nothing else but this, it would get a big thumbs up right now and a Glowing review, instead of a Grumpy one. But alas, there’s the other half with its red lights and some dude called Spock and the increasingly illogical Burnham and… yes, sorry, we have to go there.

Spock. They evoke his name as though it’s somehow powerful, as though the enormous weight of canonical history that surrounds the character originally played by Leonard Nimoy will immediately cascade over us like an emotional waterfall and instantly infuse us with a burning fascination to learn more about what is happening to Spock!

But this is episode 3 of Star Trek: Discovery, a brand new iteration of the franchise and, in almost every respect, a retcon of the original timeline that Spock was popularised within. In this context, we’ve never known Spock. Actually, we already expect that we won’t because we know he’ll be younger and played by a different actor. He’s just an empty name. We don’t care about this character BECAUSE WE’VE NEVER MET HIM.

Contrast this with the continuing trials and tribulations of Ensign Tilly who, this week, is plagued by a hallucination that is apparently trying to ruin her career. We care about this, and we root for Tilly, willing her to find a solution to this problem. We give a damn about Tilly BECAUSE WE’VE MET HER. We’ve watched her strive and suffer and cry, and stand up against injustice, and risk her life for her friends and a mission she believes in. She’s real to us. Spock isn’t. We don’t care about Spock. We have no reason to.

And all Burnham does is constantly talk about how important Spock is. Well, if he’s so damn important, let’s meet him! And for a brief moment, episode 3 lets us think that we are about to finally see the man of mystery in the flesh!

But no. Instead we get his mother.

We get Amanda, human wife of Sarek, and finally some insight into Spock’s particular problem with his family. It appears to be two-fold. Amanda, conscious that Vulcan children were supposed to grow up as cold automatons, starved him of love and yet, equally conscious of Burnham’s traumatic past and the difficulties of being an emotional human child in a land of emotionless, super-intelligent space elves, lavished it on Burnham. Spock’s human-half saw his mother spoiling his unwanted step-sister and silently burned.

This all comes to light in a confession from Amanda who’s been carrying the burden of guilt for damaging her son’s human half. But she leaves the room angry at her daughter, instead, when Burnham admits to doing something to Spock so terrible that he essentially cut Burnham off for life.

Why did Burnham wound Spock? Well, bear with me because this makes no sense. Apparently, Burnham did this terrible thing to protect him from the attentions of so-called Logic Extremists. We’ve only heard of these people in passing remarks from Sarek, but we’re supposed to regard them as the Vulcan equivalent of Taliban. Apparently Spock would be a target for them if they knew he was close to his sister. But if he was estranged from Burnham, then apparently they wouldn’t regard him as a target. You know, not because it was Spock’s father Sarek who brought Burnham to Vulcan, or married a human. They wouldn’t target him because of Sarek, from whom Spock is not estranged. No, of course not… and anyway, how the hell did teenage Burnham know all this when Spock didn’t?

This makes so little sense that it is actually giving me a headache.

Anyway, Burnham basically hurt Spock’s feelings so that he would go away and stop emailing her, or whatever. And thus be safe from being targeted (whatever that actually means).

Here’s a thought: why couldn’t Burnham just talk to Spock at the time. Aren’t Vulcan kids supposed to be incredibly clever and rational, far more so than other species’ children of the same age? Why couldn’t Burnham and Spock secretly agree to behave in public like they hate each other, so as to fool the extremists? Why?

It’s all so horribly contrived. The writer may as well hold up signs saying “Care about this. It’s important, but don’t ask why. Just care, because otherwise my shitty writing won’t make sense.” But I don’t think it’s the writer’s fault, because the Klingon half was solid. I think the Spock and red lights story arc is, in fact, a constraint on the writers of this show; something that’s been imposed from above. There’s a wall full of post-it notes in the writers’ room and the post-it notes must be obeyed, and if they say thou shalt meet Amanda, not Spock, in episode 3, and get a load of tedious monologue as a result, then that’s what you’ll get. But if you do that you can write Klingons for the rest of the episode. First do your homework, then you can play.

The writer’s name is Andrew Colville, by the way. Because credit where it’s due, the Klingon stuff was cool. The director was Olatunde Osunsanmi whose work I don’t know, but I’m happy to report that he clearly doesn’t subscribe to the Alex Kurtzman school of cinematography, which is to say we got lots of story and were not blinded by mindless action and death (here’s to you, Science Officer Connolly).

Let’s finish on some good stuff.

Pike remains solid. He generally comes across as a perfectly safe pair of hands whom his crew can trust, and who has a brain and can use it. We have no reason to resent him for chair-blocking Saru. Pike is also able to accurately summarise the plot, which he does during a conversation, in a way that Burnham failed to during the intro, which begs the question: why is Pike easier to write for?

And then there’s Tilly, yay! (You’ve just go to say yay when you talk about Tilly). This part was quite good, too. Her hallucinations are brilliantly resolved within the context of the show’s established canon and by the end of the episode, we have an actual mystery that we can get our teeth into; one that know something about, that will have consequences for characters we already know and love (unlike Spock) and is a mystery we can speculate about based on past events and existing knowledge… none of which applies to twinkly red lights. Or Spock.

[The Grumpy Guest Review is always provided by Michael Victor Bowman, whom you may wish to check out, to abuse and amuse at www.lifedescribed.com. Or follow him on Twitter: @mvictorbowman.]