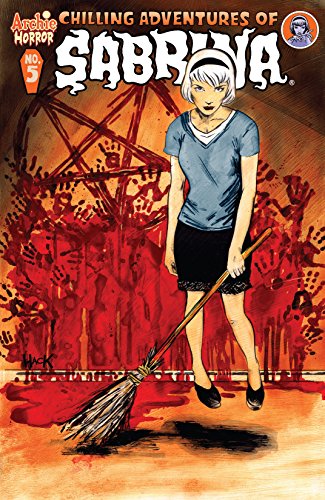 Is Netflix’s “Chilling Adventures of Sabrina” a bad series with some brilliant bits, or a good series with some awful bits? After watching all ten episodes, I am still no closer to a decision. The 2018 reboot of the 1990s tween comedy classic certainly generated a huge amount of online debate. Riding the reboot wave seems to be the current trend: new Dynasty, new Charmed, new Buffy and even, god help us all, new Shrek are all either coming soon or already featuring on a streaming service near you. And it’s safe to say that the results of reboot mania are mixed at best. So what approach would Netflix take with its new Sabrina, dropped with perfect timing into 2018’s Halloween weekend?

Tonally, aesthetically and spiritually, Chilling Adventures of Sabrina comes as quite a shock. In stark contrast to the perky original series, and even to Netflix’s other teen-friendly Archie Comics stablemate, Riverdale, Sabrina is fully committed to darkness and horror. There is no soft-focus pagan mythos here, nor is there the cutesy magical realism of the original series’ “girl witch has pretty benign magical powers which originate from who-knows-where, with hilarious cats and consequences.” No, in Sabrina 2018, these witches take their powers from Satan, directly: yes, that Satan, the one from the more literalist versions of American Christianity, hooves, goat-head, horns, embodiment of infinite evil, the works. These witches worship Satan, sign their names into his book in a dark forest ceremony, practice ritual cannibalism and sacrifice, and want to bring about his reign on earth. Things only get darker as the series progresses and the body-count mounts.

The effect is genuinely much more shocking than I had anticipated. One has to wonder what the Bible Belt made of it all. Certainly Roberto Aguire-Sacassa, as executive producer and writer/director of various individual episodes, seems to relish the potential for outrage. Where his vision succeeds is often with characterisation: in particular, Sabrina’s aunts, Hilda and Zelda Spellman (Lucy Davies and Miranda Otto) are very well drawn. (In one darkly humorous touch that seems to nod to Cain and Abel in Neil Gaiman’s Sandman, Zelda is prone to brutally murder Hilda when she becomes irritating, only to see her magically resurrected by nightfall.) Tati Gabrielle is excellent as Prudence, the Cruel Intentions-esque mean girl who torments Sabrina at the Academy, and Michelle Gomez chews the carpets and steals every scene as Madam Satan.

In contrast to the supernatural characters, however, the human characters largely flop. Harvey, Sabrina’s boyfriend, is quite remarkable in his dullness. Even as the centre of one of the show’s most harrowing story arcs, he manages to suck the life out of every plot twist. Lachlan Watson delivers a compelling performance as a gender-ambiguous Susie Putnam, one of Sabrina’s best friends, but the script seems at a loss to know what to do with the character and seems to nibble around the edges of a gender-dysphoria storyline without every really engaging with it. Jaz Sinclair has more joy as Roz, another friend who may also be touched with supernatural power, but the writers never really manage to convince us that the mortal world has an unbreakable hold over Sabrina when it seems so very beige.

The series finds even more ways to vacillate between great and awful throughout the ten episodes. The cinematography, set and lighting? Largely gorgeous. The obsession with fuzzy edges of camera focus for “sinister” effect? Awful, irritating and frankly GCSE-film-studies levels of naff. The plot? Often brilliant, especially the necromancy arc and the slow building of Madam Satan’s power. The plot holes? Excruciating. (Astral projection is built up as a terrifying risk in one episode, only to be used mundanely in the rest of them. Sabrina’s father seems to have left her personal clues to unlock a magical box he made, which then unaccountably disgorges an evil curse on her. Ambrose is under house arrest, has been for decades, for unforgivable crimes which are then worked around and basically forgiven in five minutes flat in Episode 5.) The writing? The second episode is so good we were bouncing on our chairs in excitement: the first episode is so clunking, expository and obvious that we very nearly didn’t watch the second episode. What makes this even more frustrating is that these episodes were written and directed by exactly the same people. The climax, after you’ve sat through all the other frustrations? Genuinely thrilling, frightening and brilliant.

A mixed bag, then, this new Sabrina. I enjoyed lots of it, but rarely got to the end of an episode without grumbling at the tv screen. I will almost certainly watch the second series. However, I will never fully forgive the creators for taking wisecracking, wry Salem away from me and turning him into a tedious, mute stunt-cat who occasionally miaows a “something wicked this way comes” warning and then promptly buggers off. Be warned: you can take my 90s comedy and make it twisted, Netflix, but you can never take my talking cat.