Luke Cage 2 great until the appearance of the Mighty Cheese Fist! And I wanna try Bushmaster rum! #LukeCageSeason2 #Bushmaster 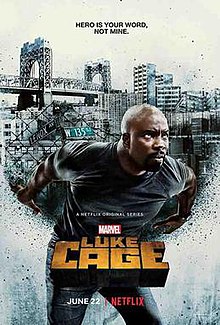 The first season of Luke Cage was flawed (a lot of very macho and repetitive fighting) but pretty much worked. The second season builds on the first season, reducing the amount of fighting but making the fights that happen more meaningful, and strengthening the female roles. The second season also works hard to add more intellectual content – and, apart from the odd misfire, succeeds. There are the usual themes of debating the true nature of a hero, of how the children inherit the sins of the father, and so on, but then there are some surprising issues raised, such as the relative social status of different shades of black, of the new nature of the American Dream, and of the superior value of a benevolent dictatorship. There’s even bisexual representation, which is extremely rare (the ‘B’ in LGBTQ is traditionally ignored and treated with suspicion).

Don’t get me wrong, season 2 still has some significant issues. There is far too much navel-gazing (reciting umpteen cliches, platitudes, aphorisms, addages and non-sensical mantras), the contrived ‘row’ between Luke and his girlfriend (all done in mixed metaphor, DIY psychobabble and American pseudo-Christian-speak) will have you groaning and reaching for the fast forward button, the attempt to involve Instagram etc to ‘be down with the kids’ will have you cringing, and the appearance of the Mighty Cheesey Fist completely ruins episode 10 (a tragedy for me, cos I always loved the Iron  Fist comics and am still devastated by what they’ve done to him on the small screen).

Yet the Bushmaster baddie (played superbly well by Mustafa Shakir) is a genuine challenge to Luke’s ominipotence and introduces some refreshingly different Jamaican mythos, politics, gang culture and patois. There are great, complex and intriguing female roles – Alfre Woodard as the Queen of gangsters is chilling and utterly convincing. The soundtrack, with regular appearances of both legendary and upcoming black musical artists, is banging. And this season actually succeeds in doing something ‘new’ (where the second season of Jessica Jones tried but failed), something new within the wider superhero genre, not just within the Marvel tv and film world. The second season of Luke Cage had an unpredictable ending which actually made me reflect back on all the other episodes and ‘see’ things differently. What Luke represents at the end of the season does break the mould. I genuinely look forward to the third season – if it can build on season 2 (in the way season 2 has built on season 1) then we should be in for something very special.

There are some duff episodes along the way (episodes 2 and 3 spring to mind), but they are worth getting thru. The RumPunch Massacre is truly something shocking. Watch for it. And I wanna try drinking Bushmaster rum!

The Defenders defending the indefensible

So, Daredevil, Iron Fist, Jessica Jones and Luke Cage all come together in Marvel’s The Defenders to combat the evil shadow organisation known as The Hand (run by a steely-faced Sigourney Weaver). The first three episodes are tightly plotted and scripted. Even if you haven’t seen the standalone series of each character, you get a decent enough characterisation of each hero to be able to follow what’s going on. And there are jokes and banter along the way (with some decent action sequences).

But then we hit episode four and everything comes to a shuddering halt. Slabs of exposition rain down on us. Every character has to go through some navel-gazing and self-doubt. The tempo of the narrative entirely disappears. Plot progression is hardly discernible. You consider switching the series off.

The already erratic character of Iron Fist then decides to show us just how much of a spoilt brat he really is – petulant, entirely lacking in wit, irrational/illogical and simply a pain in the ass. His ‘weapon’ of a glowing yellow fist looks like radioactive cheese and is well past its sell-by date. We desperately want to see him die so that we can be put out of our viewing misery. And then there’s the biggest problem of all: his plot and power are all based on mysticism and dragons (yes, dragons). The most commonly used phrase (and it’s used several times in every episode) is ‘Now, I know this sounds crazy, but…’

And it is all crazy. Senseless. Meaningless. The Hand are digging a massive hole under New York and it really is the massive hole in this series. A hole into which everything we care about disappears. Shame. The first three episodes were great. But ultimately it all leaves us feeling, like the dragon of this series, dead. The dragon’s fiery heart was ripped out by Iron Fist’s cheesy fist. If you really wanna torture yourself, find it on Netflix. For me, it only scores a 6 out of 10. Ooops. (That being said, die-hard fans of Jessica Jones, Daredevil and Luke Cage might be able to see past Iron Fist’s nonsense and be inclined to rate it as 7 or 8 out of 10.)

Be afraid of Luke Cage

So, the much anticipated companion series to Marvel’s Jessica Jones went on UK release on 30 Sept 2016. How does Luke Cage stack up? Well, Luke is of course a very stacked hero, and there’s plenty of opportunity for him to flex those pecs when taking on the gangs of Harlem. Yes, it’s a much more wham-bam series than Jessica Jones, and so pounding most of the time that it inevitably lacks the smooth noir mood of JJ. LC also sacrifices subtlety and nuance for tempo and compulsive viewing. This lack isn’t just in plotting but also in characterisation – and certainly in the first three episodes (as reported by a good number of viewers) it’s hard to give two hoots about LC himself, although things greatly improve from episode 4 onwards.

Clearly, then, LC is far from perfect (and nowhere near as good as JJ for my money), but it’s well worth a watch. The political situation within Harlem is intriguing and twisted, although the larger politics of the series as a piece of art are a tad dodgy (with a Shaft-blacksploitation feel and a very hetero-normative depiction of women). The ‘moral compass’ of the piece shifts around a fair bit, regularly catching the viewer out. And there are enough tricks and quotable lines that you can’t end up loving it (guiltily maybe, but it’s still love). 8 out of 10 from me. Give it a go!