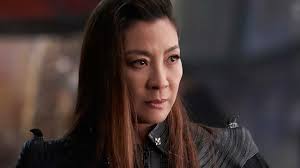 Hmm. Episode 5 is called ‘Saints of Imperfection’ and, indeed, there’s a lot of imperfection going on. Imperfection that involves nothing but contradiction and incoherence. And the characters aren’t ‘saints’ at all, cos they’re part and parcel of all the imperfection going on. The fundamental problem that started in the previous episode is that Burnham’s character is now so inconsistent it’s ridiculous. Burnham was meant to be all ‘Vulcan’, logical and dispassionate (as per the upbringing of her formative years), but suddenly she’s the most empathic person on the damn ship – more human than the humans. She mopes about, looking doleful and pained. She gazes mournfully at Ash Tyler (her true love who is denied to her), she looks tragic about her disfunctional relationship with Spock (who isn’t even there) and, unprompted, she turns up at Tilly’s quarters to engage in a weepy sob. Trust us, Burnham, it’s painful for us too. What are the writers playing at? Well, that’s it: they’re playing about. They tell us so as well, cos Georgiu says: ‘It’s much more fun [like this] than [having] this Vulcan stoicism.’ The writers reckon they can wring more jokes out of proceedings by having everybody emotional and chaotic, like Tilly. It’s very lazy writing. The writers have lost direction and, once again, they verbalise it during Burnham’s narrator reverie and summary at the end of the show: ‘If I have a path, I’m still searching for it. We all are. I envy those who can believe there’s a greater hand writing our story.’ Burnham actually says that! How self-indulgent are these writers getting? They’ve put their hands up and admitted they’ve let it all slip. Oooooops.

Where does it leave us? Back to flaming square one. All the characters that have died up till this episode are back, and they’re all fit and healthy. Georgiu (the annoyingly cryptic and creepy Michelle Yeoh, whom the producers have clearly hired for another season but aren’t really sure what to do with) stalks around wearing black and trying to find a narrative for herself. Then Stamets (whose grief had made him so interesting) has his old love and life restored to him. Ash Tyler is back on board, and for some non-reason he gets to stay, cos Captain Pine supernaturally seems to know this will cause hi-jinks in future episodes. And… whatever. (By the way, we all know Lorca’s gonna reappear too, right?) We needn’t have watched anything at all before this episode then? Because nothing has had any real or actual consequence? What’s the point then? WHAT are you doing, writers? No wonder Saru has nothing to say throughout the entire episode (despite having had such a transformative moment in the previous episode). He’s shocked into a horrified silence, probably glad he’s wearing so much prosthetic make-up so that we don’t see him cringing and wincing.

It’s a shame, cos the first half of the episode, set in the Mycelial Network, presents us with an intriguing scenario of ‘there’s a monster in the woods killing us one by one’. It taps into ancestral memories and fairy tales. It’s powerful. And the Tilly-May relationship is compellingly strange – an incipient interspecies lesbian relationship. But that scenario gets phallocentrically overtaken very quickly (by the Stamets-Hugh relationship) and it’s all put to bed before we have to see any actual physical intimacy (that’s where Hollywood draws the line, of course). AND THEN, the rest of the episode becomes this bizarre talking-heads exposition in which Pine, the Admiral and the head of Section 31 (Star Trek’s black ops division) witter nonsense about the never-ending pursuit of Spock and try to set up a political love-hate triangle amongst themselves, trying to give themselves characters and tense character relationships. ‘Enough of this manlier-than-thou bullsh+t!’ the Admiral castigates the other two… except neither of them have been acting in such a fashion. The Admiral tries to explain their characters to them. It’s like a writer’s meeting. Indeed, that’s what the entire episode is – confused writers talking to themselves about themselves, darlings. It’s so self-indulgent it’s nauseating. They seem to have entirely forgotten the audience is there. And, maybe, the audience won’t be there for very much longer. Buck up your ideas, please!