Do you know what? Episode 2 was actually pretty good (even though it stole from Firefly a bit)! #StarTrekDiscovery

Following the derivative self-indulgence of episode 1 of season 3 (which should have been entitled ‘The Michael Burnham Show’), it was a real relief to watch an episode that was actually an ensemble piece involving the wider crew of the Discovery. And it’s a proper old-school away-mission sort of episode! (Alright, it does steal its Wild West aesthetic from Firefly, but we can allow that, eh?) The Discovery crash lands on a mining colony and is in a race against time to make repairs before the ‘parasitic ice’ of the place can overrun the ship and snap it in two! Saru and Tilly head out to make contact with the locals, to see if they can scrounge some vital components… arriving in a Wild West sort of cantina to find that the locals really aren’t too friendly, and don’t really ‘believe’ in the Federation. Then, the system’s bad boy (Zareh) turns up, played ably by Jake Weber, no less. He’s looking to cannibalise the Discovery, especially once he learns there’s dilithium on board! Cue laser action and Georgiou finally earning her spurs! At last Michelle Yo is allowed to draw on some of her martial prowess (because, let’s face it, character-acting really isn’t her main strength)! I’m gonna stop there, so that I avoid any major spoilers. Suffice it to say, this episode restored my faith somewhat. Hurrah! (The only ‘lame’ plotting really was the stuff with Stamets in a Jefferies tube… but let’s chalk it up to homage and let them off on that.) I’d score the episode a solid 7.5 out of 10. Boldly go, Discovery!

Right, so episode 1 of the new season is called ‘That Hope Is You’ but, quite frankly, they should have called it ‘A New Hope’, given how much it borrows from Star Wars… not to mention Alien Mine, the BSG episode when Starbuck is marooned, and even Doctor Who! For all that, though, this season is all the better for borrowing from sci-fi that still has some credibility. If you recall, season 2 really lost its way… in so many, many ways. Spock was lost, the actors were lost most of the time, and the majority of it certainly left me at a loss… and bereft, too.

Season 3, sensibly, is a complete and utter departure from the universe that originally birthed it. Burnham (still painfully over-acting and emoting – she was meant to have been raised as a Vulcan, believe it or not, not that you’d ever know it from the way she’s constantly booing her eyes out) is propelled a thousand years into the future, along with the Discovery. Except Burnham hits a ship in the wormhole, crash lands on a nearby planet and loses all contact with the ship. Now, the whole series seems to be about her discovering the Discovery again! So it threatens to be the Burnham show throughout. Yikes. Remember your strengths Star Trek! It’s an ensemble show. Burnham is too annoying on her own to carry things!

Anyway, in the future, we learn, the Federation no longer exists. Gasp. Cue sobbing. You see, the Burn happened, during which all dilithium became unstable, or something like that, destroying all star ships in the universe! Ooops. So we’re in a post-apocalyptic junkyard future like Star Wars. Honestly, it’s so Tantooine it’s ridiculous. Still Burnham then sets about improvising a new crew for herself, based on people she meets along the way, like the cowardly lion, the tin man, the scarecrow, an animal whisperer called Book, a maine coon cat called Grudge (he COMPLETELY steals the show) and a Federation wannabe called Mr. Sahil.

This show isn’t perfect, and it does a bit of shameless flag flying at the end of the episode… but it’s timing feels right, as the US election nears and COVID closes in around us. Hope is exactly what we need. Well played, Discovery! 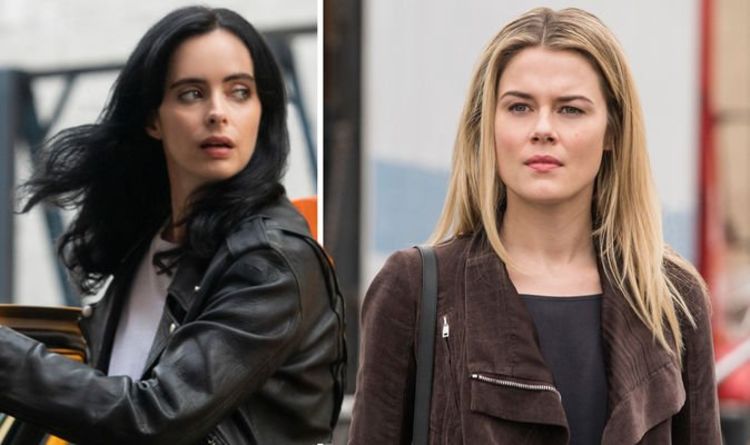 [Guest review from Matt White, screenwriter, twitter.com/tree_and_troll]
It’s a cliche that being a screenwriter ruins the watching experience. And it’s also untrue… mostly.
But it has changed the way that I watch TV and films, in three very specific ways:
1) I check the running time – and I can call, usually to within a couple of minutes, when something important will happen
2) I usually know why I don’t like something now…
3) I’ll forgive anything if it’s motivated. By which I mean: no matter how outrageous an action or decision is, I can happily accept it if it makes sense within the context of the character doing that thing or making that decision.
And that last change is why I thought the second series of Jessica Jones was a disappointment – but the third series was ace.
The last of the Marvel/Netflix superhero stories, Jessica Jones series three continues the tale of our reluctant super/private eye, still reeling from the events of series two: she’s mourning her Mum, she hates her “sister” Trish for killing her. And she’s still drinking and cracking wise. But, thanks to a chance encounter at a bar – leading to a scene which left me both hungry and disappointed – Jessica is facing off against a psychopath with a serious dose of resentment and a penchant for portrait photography.
Cue the usual mix of quirky establishing shots, lots of leather boots and buzzing mobile phones. Oh, and intrigue, dilemmas and dark, dark moments – plus the usual supporting crew with some very entertaining new kids. And it’s great. Not as good as the first series – which is surely an all-time classic. But far better than series two.
So what’s changed? It’s not the bad guys: the antagonists in each show have been powerful, scary and pitched just right.
No, it’s Trish. Or Patsy. Or the Masked Vigilante or whatever. Jessica’s foster-sister, former child-star turned news reporter. In series one I felt she was pitched just right: eager to do well and change the world, and way out of her depth. But as series two developed, Trish lurched into a fairly cliched spiral of drug addiction and murderous do-gooding. And some flashbacks and an amazing Rebecca De Mornay performance wasn’t enough to justify it for me: for Trish to take such a screwed-up turn felt like it needed more investment.
But in series three that investment was there, and Trish’s motivation was much stronger. I’m not going into too much detail about what she does – and why – but she plays a huge role in the series, and has a super-satisfying arc. And it’s all because the writers put the time and space into giving her the motivation.
Keep the motivation coming and you’ll keep me happy at least.