The term ‘metaphysical fantasy’ was coined back in 2008 when I published Necromancer’s Gambit, the first new-wave zombie novel. The term has now become an established category of fiction on Amazon, a category under which Neil Gaiman likes to list American Gods.

Second-world ‘epic fantasy’ dominated fantasy during the 1980s and 90s, but it became quite formulaic/clichéd. The noble kings and queens and Chosen One quest of ‘epic fantasy’ simply didn’t resonate with the anxiety of the new millennium, Y2K, an approaching credit crunch, more multicultural society, political scandals, and so on. What ‘metaphysical fantasy’ did was subvert the usual ‘epic fantasy’ tropes, making everything darker, more corrupt or more gothic. At the same time, it questioned the nature of heroism, bringing in a more reflective and philosophical set of themes. It also tended to have a set of squabbling, meddling gods, which brought in a lot of fun and dark humour.

So, second-world ‘metaphysical fantasy’ did for ‘epic fantasy’ exactly what first-world ‘dark fantasy’ did for ‘urban fantasy’. ‘Metaphysical fantasy’ reached its height with books by R. Scott Bakker, Alan Campbell, J. V. Jones, myself and a few others during the late 2000s, but it’s now been overtaken by ‘grimdark fantasy’. The trilogy I did for Gollancz (starting with the novel Empire of the Saviours) is often pointed to as being a classic example of the sub-genre.

‘Metaphysical fantasy’ isn’t to everyone’s taste. Although it’s got bags of dark humour, many plot twists, psychological landscapes, battling philosophies of being, demons and gods aplenty (a cosmic scale of events), it’s intellectually and emotionally challenging. It’s usually an unsettling read (albeit a refreshing one for many readers). Don’t get me wrong – it hasn’t got the voyeuristic and shocking brutalism of ‘grimdark fantasy’ (your Mark Lawrence, Joe Abercrombie, Peter V. Brett and even George RR Martin type stuff), but neither does it give you the easy escapism of more traditional fantasy sub-genres.

Want to know more? Don’t know your ‘high fantasy’ from your ‘epic fantasy’, ‘urban fantasy’, ‘sword and sorcery’, ‘steampunk’, ‘dystopian YA’, ‘dark fantasy’, ‘metaphysical fantasy’ and ‘grimdark fantasy’? Then you might like to read Sub-genres of British Fantasy Literaure, which I’m publishing with Luna Press Publishing in April 2017. (It’s based on the PhD thesis I wrote for Huddersfield University.) 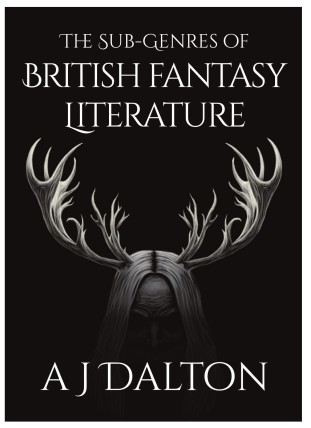