Phew, so I’ve just updated the listing of conventions, and it looks like a busy old year coming up, apparently unfazed and fearless of the all-powerful Omichron (which is a Doctor Who monster, right?). Anyway, here’s what’s coming up: https://metaphysicalfantasy.wordpress.com/events/uk-conventions-and-festivals-scifi-fantasy-and-horror/!

The Book of Demons gets profiled in The Bradford Times! #TheBookofDemons #horror

Here’s a wheeze: my new publication has made it into The Bradford Times… Bradford in Canada, that is, rather than the one in the UK. LOL. Anyway, here’s the link: https://www.bradfordtoday.ca/local-news/local-writers-work-included-in-new-tome-the-book-of-demons-4235210?fbclid=IwAR1b3e101Jr2194NQDiBkVIQRmpU16n3E8m0BxxB3q1vVCAW553kpiAyaps.

Well, despite the global pandemic/zombie apocalypse, the convention circuit has risen from its grave, from the ashes, whatever metaphor you’d like. I’ve now fully updated this website’s listings, all the way through to late 2022! Check it our here: UK conventions and festivals: scifi, fantasy, horror and comicbooks | Metaphysical Fantasy (wordpress.com)

Live and let live in ‘Army of the Dead’ #ArmyofthedeadNetflix

Posted by A J Dalton on May 27, 2021
Posted in: A J Dalton, reviews. Tagged: Army of the Dead, horror, movie review, zombie. Leave a comment

Oddly, I ended up caring more about the Zombie King more than the two-dimensional human characters in the new Army of the Dead movie on Netflix. It opens with a US military convoy carrying a ‘dangerous cargo’ out from the Area 51 base in the Nevada desert. There’s an accident and our Zombie King breaks free! He promptly begins to infect and recruit an army to overrun Las Vegas (cue the comedy-horror to a modern soundtrack).

The US government fails to quell the zombie outbreak (yes, it’s all fairly covid-y) and, instead, seals off the city. The government is tempted to nuke the entire place, but there are humanitarian activists who create a fuss and everything gets a touch delayed.

A mercenary group of humans then decides (for various individual backstory reasons) to break into the city in order to retrieve a load of cash from under one of the mega casinos. It basically becomes a bit of a heist movie at this point.

It’s the politics of this movie that set it apart from the norm. We come to realise that the zombies aren’t just mindless invaders who should be destroyed – as they seem to have a social hierarchy and a language. Indeed, they just seem to want a place to live – it’s apparent that they could break out of Las Vegas if they wanted, but they’re content simply to have a home. See the politics? Indeed, given how poorly the human refugees of the city are treated by their own government in a holding camp, we understand that the true monsters in this movie aren’t the zombies. The zombies actually make the humans look bad. And we come to appreciate just how poorly the Zombie King has been treated (experimented on in Area 51, humans terrorising his city and ‘family’, etc)!

Is it full of silly gore? Yes. Is the tone of the movie entirely haphazard? Yes. Is it one helluva lot of fun? Abso-zombie-lutely! And the cast isn’t too bad. If you’re a fan of the genre, this movie has something a tad different to offer. Worth a look. 7 out of 10 from me!

Well, I watched the first three episodes of The Terror on the BBC. That seems like giving it a fair crack, really. It certainly breaks the ice. LOL. It tells the historical tale of the ill-fated British ships named The Erebus and The Terror which sought to discover the North-west Passage back in the 1840s. This puts us in mind of one of the key sub-plots of the novel Frankenstein, of course. We are expecting some sort of monstrous horror from the off, therefore.

One of the producers is Ridley Scott, so it should have some chops, right? Well, the setting in the icy wastes is convincingly done. The costuming and the claustrophobic life on the ships is beautifully evocative of the era. The dialogue is interesting and engaging, and the internal politics are diverting, and they do build a sense of tension. The cast is top-notch. So what’s not to like?

Sadly, this series provides us with its own spoilers right from the beginning. It states several times over in the opening sequence that everyone ends up dying or disappearing. And the start of the second episode makes sure to hammer it home yet again. Therefore, we’re just sat waiting to see each of the characters die in a fairly anti-climactic manner. The episodes do try to create ‘spooky’ moments that cannot be rationalised, but then we understand that there’s just a big polar bear on the loose and killing everyone. Oh. So what? The polar bear might be controlled by a vengeful Inuit. So what? But the manner of the deaths seems poetic and symbolic of the individual’s own sins punishing them. Yeah. So what? AND WHERE’S THE TERROR IN ANY OF THIS?

Sheesh. What a waste of time and money. The series would have done far better to get writers who understand the plot-beats and mechanics of horror. I really wouldn’t bother with the show if I were you. But that’s just my opinion.

Sassy sequences and laughs in Vampires Vs The Bronx! #VampiresVsTheBronx #vampires #netflix #horror

Watched the new comedy-horror Vampires Vs The Bronx on Netflix last night! A faceless corporation, Murnau Properties (a reference to the director of Nosferatu, presumably), is buying up real estate in the Bronx on the cheap, gradually dispossessing the underprivileged black and Hispanic community, forcing them out and generally gentrifying the place, so that the real estate is then worth far more. Here, then, is the story of modern America: the rich getting richer and the poor getting poorer. Once we find out who’s behind Murnau Properties, we’re not surprised really: a privileged, white, parasitic elite (yes, vampires). The vampires in this movie, therefore, work on both a literal and metaphoric level – making the whole movie strangely compelling, despite its general lack of originality.

As you’ll detect from the above, there is a general satire of modern America going on. In keeping with this satirical vibe, there are a good number of visual jokes as we go, using Timberlands, mobile phones and skateboards. Indeed, this movie is authentically immersed in the modern black and Hispanic experience in the US as well as the genre of vampire fiction (Salem’s Lot, Blade, etc). It makes for a persuasive and well-informed mix.

Looked at from a female perspective, there is quite an interesting (albeit understated) debate concerning competing narratives around ‘beauty’. The Aryan white, blonde female vampire dominates the first half of the movie, but is slowly revealed as all manipulative artifice, and ugly, selfish demand, prepared to stop at nothing to win advantage over or destroy men and women alike. Zoe Saldana is actually sacrificed upon the altar of such contrived beauty in the movie’s first scene! By the end of the movie, however, the young black character of Rita (Coco Jones) wins out with a self-possessed and generous version of beauty that is ‘au naturel’, a beauty that cannot simply be owned by others (be they a vampire or the heroic male lead).

So, this film has social relevance and importance! Okay, okay, there’s a LOT of cliche, if you know the genre well. But it’s only 1hr25mins long, so not too much of a demand on your time. It gets a 7 out of 10 from me. Check it out! 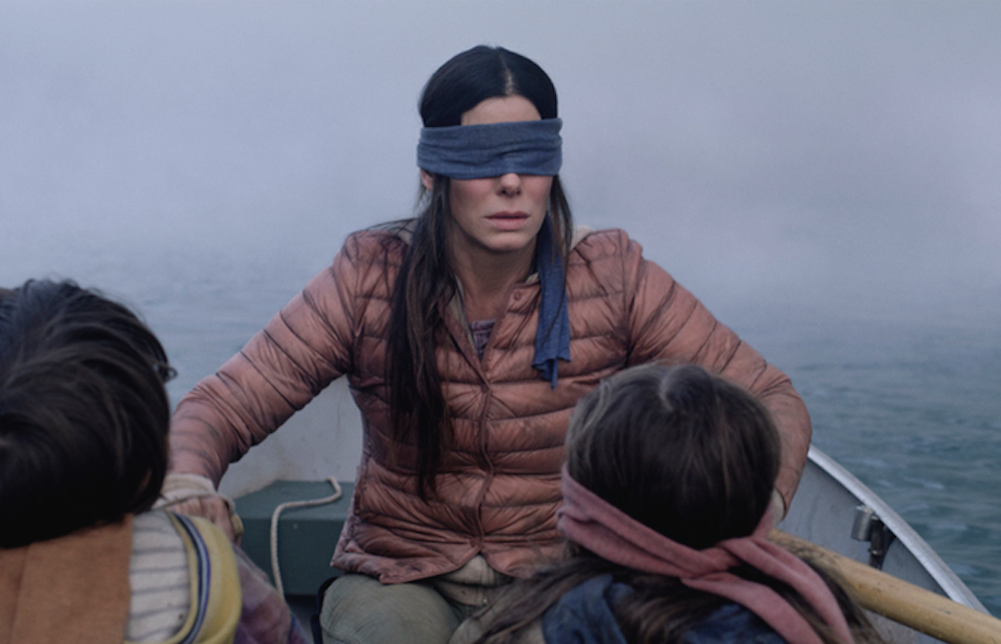 Satan speaks out: ‘You shouldn’t believe everything you read. There’s a lot of fake news out there!’ #fantasy #horror #Satanic #science fiction #newbook

Posted by A J Dalton on April 7, 2020
Posted in: A J Dalton. Tagged: a j dalton, biography, horror, new book, Satan, Satanism, The Satanic in Science Fiction and Fantasy. Leave a comment

Satan launches his new authorised biography today: The Satanic in Science Fiction and Fantasy! ‘What’s the odd misunderstanding between friends, eh? Come on, live a little, before it’s too late. Hey! Don’t look at me. I’ve never even heard of the damned virus. I was busy elsewhere.’